Wreck dives can help you discover a whole new dimension of lost artifacts that tell stories of people and places and a world long gone. You get to discover a vessel that existed on land and was interacted by people who didn’t know that it would end up at the bottom of the ocean.

One of the most fascinating wreck dives is to go down to Titanic’s sister ship, the HMHS Britannic. Who wouldn’t want to travel back in time and scuba dive such a famous wreck!

There are so many different divable wrecks, each one holding its own unique story of its journey within itself. From cruise liners to military ships to smaller passenger ferries; if you’re looking to discover a ship, there’s one out there for you to dive to.

Everyone has heard of the infamously tragic Titanic and the 1500 odd people she took down with her because of James Cameron’s rendition starring Leonardo DiCaprio and Kate Winslet, but not many know about her two sister ships.

The first being the Olympic, often mistaken in pictures as the Titanic, and the second sister ship was the lesser-known Britannic. Let’s have a look at the history of Titanic’s sister ship and the divability of this hefty ship and her wreck.

The ship was 882 feet in length and 175 feet high, weighing just under 50,000 tons. With these dimensions, the Britannic is the largest ocean liner that has ever sunk.

The Britannic’s existence was conceived through a dream of having a fleet of the largest, safest and most luxurious passenger liners by J. Bruce Ismay and Lord Pierre. This dream was actualized by naval architects Thomas Andrews and Alexander Carlisle.

Only a year after the conception, they started construction on the first two ships, the Olympic and the Titanic; due to their extreme size, only two ships could be built at once. The construction of the Britannic was started in 1911 but was completed in 1914, a whole two years after the unfortunate sinking of her sister ship, the RMS Titanic on her maiden voyage.

In August 1914, the Britannic was all set for her maiden voyage between New York and South Hampton; unfortunately, World War I began before she could depart. Though originally bigger ships were not being requisitioned for the war, the number of casualties determined large hospital ships were a necessity.

In November of 1915, the Britannic was taken out of storage at Belfast, painted white with a large red cross, and renamed HMHS (Her Majesty’s Hospital Ship) Britannic to be used in the first world war. The ship’s dining areas and rooms were converted into patient care rooms and operation rooms.

When, Where and Why She Sank

After completing five successful missions as a hospital ship, the Britannic took her last voyage. The ship left Naples on a Sunday afternoon in November 1916 after a break in a storm and made her way toward the Kea Channel.

Enroute to Lemnos from South Hampton, after a brief stint in Naples, the ship was crossing the Kea Channel. Unbeknownst to those onboard, the channel had been planted with mines less than a month before the Britannic’s voyage through it.

On the 21st of November 1916, a mine hit the hospital ship on the starboard side and caused a lot of damage. Her Majesty’s Hospital Ship Britannic started filling with water, and the transmissions were damaged; SOS messages were being sent out, but nothing was being received.

Evacuation plans were in full swing within a few minutes of the explosion; the blast was so bad that the Britannic was in the same condition in ten minutes that the Titanic was in one hour.

The captain made all efforts to beach the ship at Kea Island, but the damage to the ship was not allowing it. The ship became a casualty of the first World War and sank rapidly onto the seafloor from the starboard side. 1035 people survived the explosion, and 30 lost their lives.

Can You Dive To The Britannic?

The wreck of the HMHS Britannic lies 400 feet below the surface and is the largest ever ocean liner to sink. The wreck lies about 3 nautical miles off the shore of Kea, Greece, in the Aegean Sea.

The Britannic is an idyllic dive for experienced technical divers considering it is so close to the shore and at a relatively achievable depth. However, it can take many months (up to a year) of preparation and permissions to actually get to the dive site.

Do You Have To Have Special Permits To Dive To The HMHS Britannic?

If you’re planning a wreck dive to the Britannic, be ready for some delays. It is not something you can do spur of the moment; it requires multiple permissions and paperwork through the Greek government before taking the dive.

The wreck was discovered in Greek waters by explorer Jacques Cousteau in 1975 and then bought by British maritime historian Simon Mills in 1996. The reason the filmmaker/historian gave for purchasing the wreck was that he did not want it to be looted.

Now, if you would like to dive the wreck, you need to get special permission from the owner. Once that is achieved, permits need to be acquired from the Greek government to take the dive.

Can Anyone Dive To The Britannic?

The dive to the wreck of the Britannic is not an easy one. The Aegean sea in which the wreck lies can be extremely unpredictable; going from calm and steady to rough currents in a matter of minutes. Though it is a tempting dive for all scuba divers because of its vicinity to the shore, it is a deep and dangerous dive.

Due to the unpredictability of the current, and the depth of the dive, you are not only required to be an experienced diver but specifically an experienced technical diver. Wreck dives are dangerous on their own, and less explored ones like the Britannic are that much more dangerous.

Another prerequisite for the dive is being a certified rebreather diver. The descent to the wreck can take up to three hours, so you need a way to dive that lasts a long time, and depth is not limited by the pressure of the water. The only way to achieve this is through a rebreather. 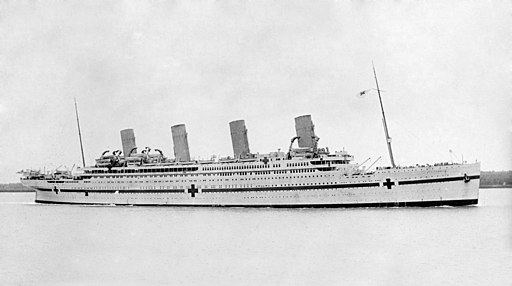 Are There Guided Dive Tours to the HMHS Britannic?

Though there are multiple grand dive tours to the notorious big sister of the Britannic, there are no guided dive tours available to her. This is because of the extensive permit process and difficulty of the dive. Only experts and dedicated technical divers make the journey down to the wreck.

There have been efforts made by locals to make the wreck available as an open scuba diving site, but they have all gone in vain because of political climates and technicalities of the dive.

However, if you are experienced enough and manage to get permission, this is one of the most spectacular wreck dives in the world; relatively unexplored, largely intact and just waiting to be discovered!

Comparing Goggles vs Masks – What are the Differences?